Alfacar is located in the central part of the Vega of Granada, between 915 and 1.200m altitude, in the South-western slope of the Sierra de la Alfaguara. The town is known for the quality of the water coming from the great diversity of fountains and springs, as well as by the recognized prestige of their bread-ovens, the Natural Park of Sierra de Huétor, the Church of the Asuncion (16th century) and the universal poet Federico García Lorca.

The origin of the municipality is Arabic. Specifically, the term Alfacar is related to pottery. Due to its strategic location and the supply of drinking water to Granada, played a major role in the surrender of the city of Granada Muslims, since being besieged the city of Alhambra and deprovisioned of water, had to surrender and capitulate the town of Alfacar, days before the capital.

It is recommended to wonder around the streets of the town through its countless fountains up to the top where we find Aynadamar spring and its irrigation ditch, visit the Park tribute to Garcia Lorca and reach the small village of Viznar, main access to the Park.

You will find a varied and delicious gastronomy in Alfacar, as well as a good number of tapas bars that will delight visitors.

The Sierra de Huetor is located just a few kilometres north east of Granada City and beside Alfacar.

Although only a stone’s throw from the centre of Granada, it is an area that is often overlooked by foreign tourism. Bit-by-bit, it is beginning to open up with more people starting to discover the natural beauty that sits within.

Local Granadinos, in particular, are coming out on weekends to escape the city and in the summer months the Sierra is popular with those seeking respite from the heat. Historically, the Sierra de Huétor was used as a summer retreat for the Moslem Zirite Kings (1010-1090AD).

About the Sierra de Huétor and la Alfaguara Natural Park

The Sierra de Huétor and la Alfaguara Natural Park is relatively small and covers 12,127 hectares. It was designated a natural park in 1989 and is characterized by its incredible diversity. Geographically, the limestone bedrock has produced some spectacular ravines, steep cliffs and is home to some of Andalucia’s most impressive caves, such as the Cueva del Agua

The altitude differences are relatively minor when compared to its neighbour, the Sierra Nevada National Park, with heights that range from 1100m to almost 1700m. The highest point being the Cerro Buenavista which stands at 1675m high.

Despite its size and relatively low mountains, the Sierra de Huétor has an extremely pronounced biodiversity and a wide range of microclimates. There are numerous endemic and rare plants growing here.

Huge forests of pine trees were planted at the turn of the 20th Century and continue to thrive today. Aleppo, Laricio, Maritime and Austrian pines are all common and found throughout the Sierra. They are inter-spaced with atlas cedars, Spanish firs, holm oak, and maples. The variation is just staggering.

The flora is typically Mediterranean, with more than 800 species of flowering plants that have been recorded in the park, over 75 of these endemic in the Iberian Peninsula. The ever changing micro climates and vegetation means that a walk through the park is a pleasure to the senses, with new smells and colours on almost every corner.

Mountain goats, wild boar, red fox, genets (Genetta genetta), weasels and badgers are some of the most common mammals to be found. The park is also home to one of Spain’s last populations of wild cat (Felis silvestris).

In 2002, the Sierra de Huetor was declared a special protection area for birds (ZEPA) and offers a significant raptor population. Golden and booted eagles, buzzards, owls, goshawks and sparrowhawks are all present, to name but a few.

The area has been an important source of water since Moorish times.

One of the most amazing feats of engineering comes from the Moorish era. With the Moors creating an irrigation channel, known as Aynadamar, that taped the Fuente Grande spring, in the village of Alfácar. The water was then channelled all the way back to Albaicín in Granada city.

The sources of the Darro and the Fardes rivers are found within the park. The Darro river being one of the most of the important rivers in the Granada area.

The porous limestone rock is also home to many other streams and springs.

The remains of trenches and fortifications bear witness to the battles that were fought here during the Spanish Civil war. The Cerro de Maúllo was the front line between the Republicans and Nationalists for many years. 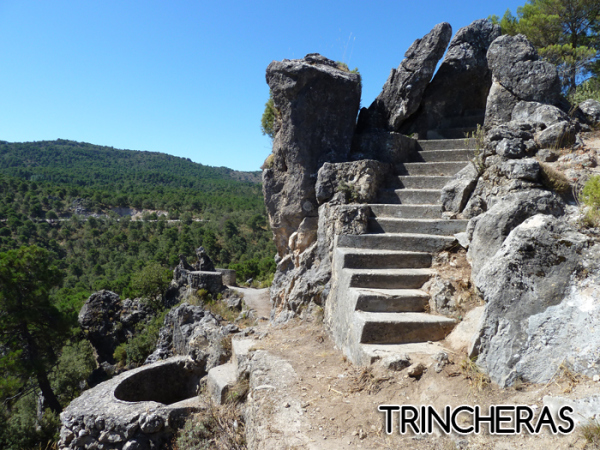 Things to see and do

Anything to do with the outdoors. Hiking, bird watching and mountain biking are popular activities. Most of the trails and paths are well marked and easy to follow. The most popular ones start from the Puerto de Lobo’s visitor’s centre.

The Puerto de Lobo visitor’s centre is found near the village of Viznar – tel. 958 540 426. Open daily, it offers information, maps, picnic areas and some fantastic views of the Sierra Nevada mountain range. There is also an animal refuge that houses birds, mountain goats, stags, reptiles etc. from the park (a big hit with the children).

‘Areas recreativas’ are protected recreational areas that are located in places of exceptional beauty. They are cleaned regularly and offer picnic tables and benches, barbecue pits and a source of water. There are three within the Sierra de Huetor; Fuente de los Potros (Huétor Santillan), Puerto Lobo (Víznar) and La Alfaguara (Alfacar). They all make a fantastic picnic spot.

The most popular hiking routes start from the Puerto de Lobo visitors’ centre. They are all well marked and the centre can provide maps if necessary. Here are some suggested routes.

Cruz del Víznar sendero – a 5kms (2hrs) circular walk that starts in the picnic area just next to the visitors’ centre. Passing through pine forests and eventually reaching the wooden Cruz (cross) of Viznar, which offers some exceptional views over the surrounding countryside. For more information and maps

Cerro del Maullo sendero – a 3kms (1.5hrs) circular walk with a quite a steep climb up the 1,928m peak of the Cerro del Maullo. You pass through the remains of the trenches of El Maúllo from the Spanish Civil War

Las Mimbres sendero – is an easy 5kms (2hrs) walk that goes through some spectacular pine forests. The walk starts and ends in the Fuente de los Potros recreational area (see above)